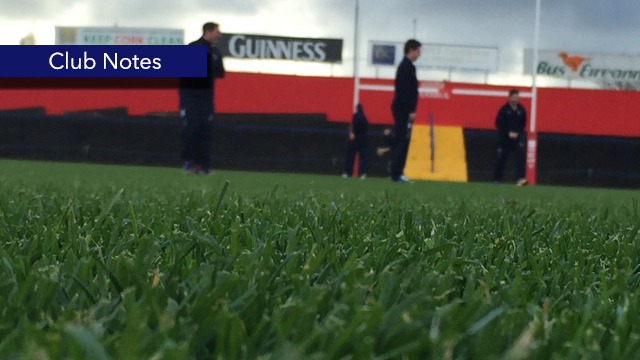 Old Crescent RFC sides in action over the weekend were our Under 20’s and our Senior Seconds who both took on Garryowen opposition in Rosbrien.

Fielding our strongest panel of the season and coming off a win in our previous Donal Walsh trophy game, our Under 20 side hosted Garryowen in Rosbrien last Saturday afternoon. We started strongly and our forwards quickly established dominance in the set pieces with the lineout in particular operating well. We opened the scoring after just four minutes when we secured ball off the top of the lineout and following crisp passing along our back line, right wing Cian Malone crossed in the corner for an unconverted try.

Continued pressure resulted in a second try with Liam Mc Mahon touching down after a strong maul from the forwards which was converted by Rory Cunningham. We crossed for our third try of the game after 25 minutes with Liam Mc Mahon scoring his second try with Val Mc Dermott converting to give us a 19 point lead. A penalty goal was the only score for the visitors in the first half.

In the second half, a combination of injuries and yellow cards for the both sides resulted in a more uneven game. We did create a couple of chances to score the vital bonus point try but the Garryowen defence held firm. The only score of the second half was another penalty goal for Garryowen to leave the final score 17 points to 6 in our favour.

It was a brave and committed display by all 19 players in the squad with Cian Reale, Liam Mc Mahon and Jack Hogan standing out with their individual performances. With three games remaining in the first round of the Donal Walsh trophy, there are lots of positives to reflect upon and we wish our Under 20’s well in their remaining fixtures.

Last Monday, on a lovely crisp evening for rugby, our Senior Seconds took on their Garryowen counterparts under lights in Rosbrien.  After an evenly matched first quarter, Crescent went ahead when Nigel Kerr pinched an intercept from the Garryowen backline and ran over half the field to score a try.  The convert was missed.

There followed a sustained period of Garryowen pressure with Crescent on the back foot for long periods.  This pressure resulted in Garryowen getting in for an unconverted try to level the scores with five minutes left in the first half.  Garryowen went ahead with a well taken drop goal as the first half ended.

Garryowen continued to dominate territorially in the second half, and they went further ahead with two tries, one converted, in the third quarter of the game.  With the visitors now leading by 20 points to 5, Crescent finally got a foothold in the game in the final quarter, and two tries in quick succession, the first by Dave Egan and the second by Colm Doyle, both converted by Gareth Quinn McDonagh, brought us to within one point of our visitors.

With our tails up and the momentum firmly with Old Crescent, our Seconds launched attack after attack at the now rattled Garryowen side in search of the win, but, alas, an overambitious ‘Simon Zebo’ type move gifted the ball to a Garryowen player who gratefully accepted it and ran in for an easy try which they converted to leave the final score Old Crescent 19 Garryowen 27.