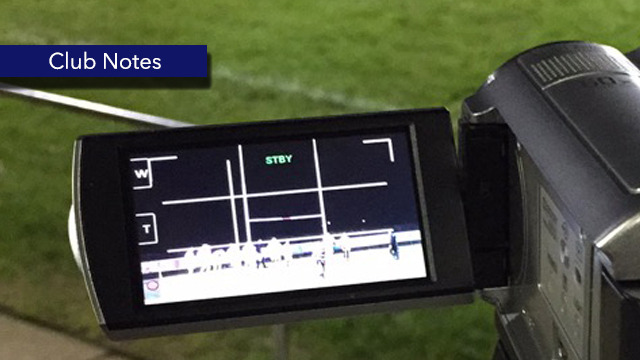 Last Friday night, our Senior team recorded a superb victory over Nenagh Ormond in in Nenagh in the Cyril Fitzgerald Plate. Whilst our opposition compete in the division above us, we performed to a standard that belied our Division 2B status. The home team started the contest with huge aggression and piled significant pressure on our forward, culminating in the awarding of a penalty to Nenagh after 10 minutes. This was duly converted to leave the score 3-0 to Nenagh.

After this laboured start, our forwards, marshalled by the evergreen Billy Leahy started to exert real pressure on the Nenagh scrum and lineout. Sean Monoghan operating at two in the lineout stole some valuable possession for our team and it wasn’t long until our maul started to dominate which subsequently led to our first score  when Sean McGee crashed over from close range on the back of a 20 metre surge from our maul.

With 30 minutes on the clock, Nenagh converted a close range penalty to bring the score to Nenagh 6, Old Crescent 7. Cathal Monoghan was relishing his first start at 10 this year and he steered us back into the Nenagh 22. We stayed there for the remainder of the half, and right on the stroke of half time Larry Hanly ran an exceptional line from Cathal Monoghan to break a number of tackles on his way to touching down under the posts. Shane O’Brien duly converted leaving the half time score 6-14 in our favour

The second half saw an enormous defensive effort from Old Crescent that withstood a barrage of attacking possession from Nenagh, with former Old Crescent favourite Mack piling on the pressure for the home side. Our scrum and lineout continued to function superbly and our tackle count continued to rise. However, Nenagh managed to bring the score back to 12-14, but with ten minutes remaining we again worked a superb try from the back of a dominant wand well organised maul.

With the scoreline now reading 19-12 in our favour, Old Crescent withstood one final push from a gallant Nenagh side but we were not to be denied this well-deserved win. On such an exemplary team performance it feels unjust to single out anybody for special mention but we could not let the occasion pass without commending Billy Leahy on what can only be described as a master class in game management and guile. We missed you Billy and its great to have you back for the remainder of the season!

On Saturday last our Third’s welcomed Kilrush to Rosbrien for a Gleeson League match. In what was perfect conditions for rugby, both teams kept ball in hand, however, defences dominated this encounter with neither side giving very much space away. This was reflected in the halftime scoreline of 0-0. The trend continued into the second half with Crescent having  the majority of possession but unable to break down a dogged Kilrush defense. After a period of Kilrush pressure, after being held up on the line, Kilrush were able to put the ball through the hands and go over in the corner for what would prove the games decisive score. The conversion was missed leaving the score 5-0 to Kilrush. Crescent rallied but errors at crucial stages prevented our Thirds from getting the score they so desperately needed, leaving the final scoreline 5-0 to Kilrush. In what was a disappointing day, there were a few positive performances from Dave Dennehy, Mike Manning, Robbie Walker and Tommy O Sullivan.

Our Under 15’s made the short journey to Dooradoyle on Sunday morning to play Garryowen in the Under 15 League. Conditions were to say the least difficult with a thick fog in Dooradoyle. The first half was scoreless despite some gallant efforts from Old Crescent,

Early in the second half, Garryowen took the lead with a well taken penalty, but Old Crescent were quick to respond with a superb try scored by Ben Carew. Old Crescent played some very good rugby from then on and the tackling from all the team was superb. Unfortunately, we conceded a penalty with full time almost up to leave the score 6-5 to the Garryowen. However, our Under 15’s fought back and in the last play of the game, a brilliant run by the Old Crescent No:11, Luke Callanan, saw him get over for an unconverted try to leave the score 10-6.

Joyous scenes all round followed from players and parents. Congratulations to the Under 15’s Coaching Team of Jim Murphy, Eoin Kearney, Bruce Duggan and Liam Toland.

In fixtures next weekend, our Senior side resume their UBL campaign with an important home fixture next Saturday against first time visitors to Rosbrien, Sligo RFC.  The game kicks off at 2.00pm, 30 minutes ahead of the normal UBL kick off time.  Our Thirds travel to Ennis next Saturday afternoon to take on Ennis RFC at 2.00pm in the Gleeson League.

It was great to see our clubman, Andy Brace, line out on the Aviva pitch as the fourth official for the Australian international game. Since hanging up his boots after a long and illustrious playing career with Old Crescent RFC, Andy has progressed steadily through the referee ranks and has a very promising refereeing career ahead of him.  Andy is a great example for Old Crescent players who would like to continue in the game and also contribute to their Club after their playing careers by taking up refereeing.