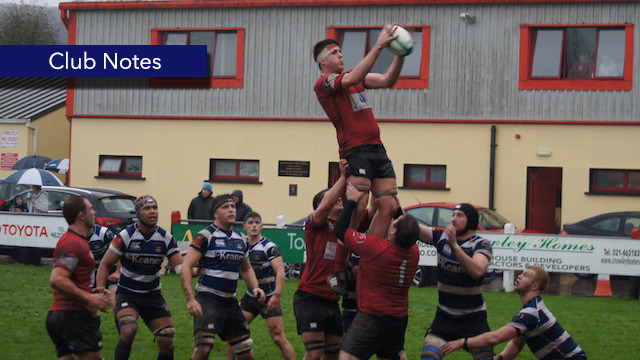 Our senior team travelled to Midleton last Saturday to take on Midleton RFC in the UBL.  The weather was atrocious and made for very difficult playing conditions.  Despite the weather, Crescent got off to a good start and spent much of the first half in the Midleton half.  However, we had nothing to show on the scoreboard for this Crescent pressure.  Several Crescent attacks were held up on the Midleton line and a penalty attempt came back of the post in this fruitless period.

The heavier Midleton pack were more suited to the wet conditions and they gradually got more into the game the longer it went on. With half time approaching, and a Crescent player in the bin, they secured a converted try to lead at half time by seven points to nil.

Now playing with a strong breeze and occasional driving rain, Midleton got the first score of the second half with a converted penalty after five minutes to extend their lead to 10 points to nil.  The game was far from out of sight and Crescent continued to attack manfully throughout the second half but found the conditions difficult with several attacking moves breaking down with passes going astray as our players dealt with a greasy ball and ground.

Midleton’s dominance in the final quarter eventually told when they scored a converted try with ten minutes to go and a further converted try just before full time, to leave the final score Midleton 24 Old Crescent nil.

Our A team played UL Bohs at home in Rosbrien on Monday evening in the Munster Senior Seconds League on a fine evening for rugby after the very wet weekend.  UL Bohs kicked off the scoring with an early converted try but on fifteen minutes Stephen O’Shea got over for a Crescent try which wasn’t converted.

On the half hour, Brian Clancy kicked a penalty to put us in front by a point, and just before half time, Brian slotted another penalty to put Crescent 11 points to 7 ahead at the break.

However, the Crescent side refused to give up and continued to attack the Bohs lines, with Stephen Murphy finally crashing over for a try near the posts which Brian Clancy converted. The final score was Old Crescent 18 UL Bohs 19.

Old Crescent will have our first competitive fixture against Tullamore RFC in Rosbrien at 2.30pm next Saturday in the UBL.  Tullamore have made a good start to their league campaign so the pressure will be on us to deliver a good performance and secure a home win.  Our Thirds make the short trip to Young Munster for a Gleeson League clash at 2.30pm next Saturday.

The IRFU ‘Your Club Your Country’ Grand Draw 2014 is now underway, and tickets are available from any committee member.  There are some fabulous prizes and all funds raised through ticket sales go to Old Crescent. Find out more here.

Finally, there has been a very positive reaction to the new Old Crescent RFC website. See it for yourself at www.OldCrescentRFC.com.