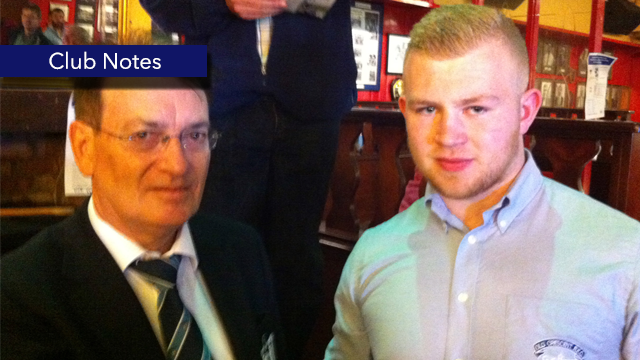 Old Crescent RFC hosted DLSP in Rosbrien last Saturday in our second home AIL game of the season. The season had began disappointingly for the club with losses in the two opening AIL games against City of Armagh and Highfield, and the Crescent senior squad and team management were determined to stop the rot with a home win.

DLSP, captained by former Old Crescent player, Maghnus Collins, were first on the scoreboard with a converted penalty after 12 minutes, but this was quickly replied to by Crescent with a successful penalty attempt by Shane O’Brien a few minutes later.

Crescent were on the attack again, midway through the first half, and a clever kick into touch behind the DLSP back line pinned them into their own corner. The visitors won their own line out but they fluffed the attempted break out by knocking on into the hands of Larry Hanly who out paced the cover to touch down in the other DLSP corner. The attempted touch line conversion was missed.

Shortly afterwards DLSP got back in touch with a converted penalty but Crescent restored their winning margin with a second converted penalty kicked by Shane O’Brien. With a few minutes of injury time being played at the end of the first half, Crescent launched a final attack. The ball went through a number of hands before Padraig Quinn burst through DLSP tackles to score superb try out wide. The conversion was missed and the half time whistle sounded with Old Crescent in front by a thoroughly deserved 19 points to 6 margin.

Crescent continued where they left off and were soon pressing deep into the DLSP half. After a series of forward attacks close to the DLSP line, captain for the day, Cathal O’Reilly, crashed over for a third try for Old Crescent. The conversion was missed but Crescent now led by 24 point to 6, and a half an hour of play remained in which to secure a bonus point fourth try.

A few minutes after scoring his try, Cathal undid his good work by being sent to the bin for ten minutes, and DLSP used their numerical advantage to score an unconverted try while Cathal was off the field. However, Cathal made up for his indiscretion as soon as he returned to the play by scoring a second try after great work close to the DLSP line by the Old Crescent pack. Shane O’Brien kicked the conversion and Crescent kept DLSP in check until the final whistle to win by the emphatic margin of 31 points to 11.

Overall, it was a superb display by the Old Crescent senior team who put the opening two defeats behind them and got their AIL campaign back on track with a bonus point win. Prop Sean McGee (seen here with Club President Dr Michael O’Flynn) was the deserving winner of the Old Crescent Man of the Match Award, which is sponsored by Camden Square in the Crescent Shopping Centre.

Our A team were not so lucky when they were well beaten by Shannon in Coonagh on Sunday, going down 33 points to NIL.

Our Thirds opened their Gleeson League campaign last Friday evening in Rosbrien with a comprehensive 46 points to 23 points win over Galbally RFC.
After a hectic schedule for all four of our senior teams over the last few weeks, next weekend is relatively quiet with just our Thirds in action when they take on Richmond at 2.30pm next Saturday at home in Rosbrien in a Gleeson League clash.
Tweet