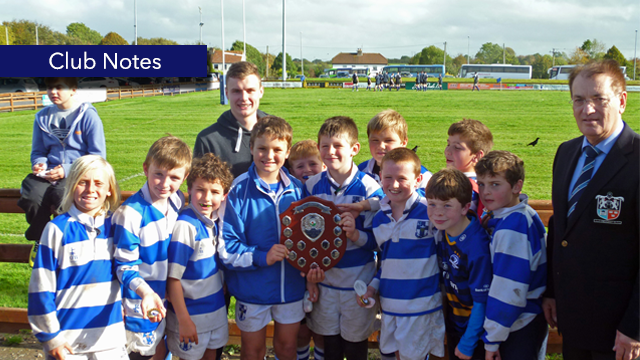 Our Senior team took on Cashel RFC in the second round of the Munster Senior Cup at home in Rosbrien last Saturday afternoon. The team look splendid in their new kit, sporting the logo of our sponsors, Keane’s Jewellers, for the first time. Unfortunately, that was as good as it got, as we suffered a comprehensive defeat at the hands of a rampant Cashel side.

Playing with the aid of a strong breeze in the first half, we were first to score when Shane O’Brien kicked a penalty after fifteen minutes. However, while most of the play was in the Cashel half, we were unable to take advantage of the wind, and Cashel were next to score with a converted penalty on one of their few excursions into the Crescent half.

The first half ended all square at three points apiece, and we now faced a difficult second half in which Cashel would have the wind advantage. We suffered a further blow when our Captain for the day, Cathal O’Reilly, was sin binned five minutes before half time.

Two minutes into the second half, Cashel made swift use of the wind advantage, and the extra man, when they scored a converted try on the wing. They followed this up with an unconverted try ten minutes later, putting the visitors 15 points to 3 clear.

Despite being behind, Crescent continued to press forward and troubled Cashel for most of the second half but just couldn’t get on the scoreboard. Cashel wrapped up the win with a converted third try on full time. The final score was Old Crescent 3 Cashel 22. Our quest for a first Munster Senior Cup continues.

Our A Team played Richmond in the Munster Senior Seconds League last Sunday afternoon in Rhebogue, and came away with a convincing 22 points to 13 win.

Last Friday night, our Thirds travelled to Annacotty to take on UL Bohs in the Gleeson League. After the previous week’s disappointing loss to Richmond, player/coach Andy Cunnane and his team were looking to rebound with a strong performance. In very wet conditions both sides started brightly, but as the first half went on Old Crescent grew into the game and took a deserved lead right before the interval. After a powerful line break by back row Martin Kelly, Crescent recycled the ball and centre Don Caulfield charged over the line from ten meters out, breaking through three tackles in the process. Winger Sean O’Dea converted to leave the visitors 7-0 up at half time.

In the second half, Crescent began to control the game through out-half Kevin South, while lock Gerry Fitzgibbon dominated the line out, stealing several of the home side’s throws. Crescent extended their lead when South intercepted the ball in his own half and raced to the corner, showing quick feet to beat the opposition cover.

After an impressive performance, the forwards got a well deserved try before the end when debutant Welsh back row Marc Fussell broke off the back of a rolling maul and touched down in the corner. The game finished 17-0 to Old Crescent.

The Tournament got underway at 10.30am with eight games being played simultaneously. After the first three games were played by each team, everyone retired to the clubhouse for a well deserved break and refreshments. Anthony O’Dwyer and his staff played a blinder dishing out sausages and drinks to all. The only downpour of the day occurred during the break so someone was obviously looking out for us!

Collette and Michelle O’Riordan, widow and daughter respectively of the late John O’Riordan, past President of Old Crescent RFC in whose memory the Under 11 Tournament is held annually, presented the prizes. Congratulations and thanks are due to Peter Duggan, Tournament Organiser and his team, for running an excellent event that was enjoyed by all. Special thanks also to the O’Riordan family and the parents of our Under 11’s, without them the event couldn’t have gone ahead.

The only senior Old Crescent fixture over the upcoming bank holiday weekend is an Under 20 South Western Conference game at 2.30pm next Saturday in Rosbrien between Old Crescent U20’s and our near neighbours Young Munster.