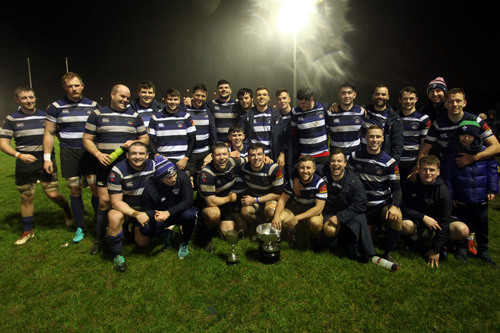 Old Crescent entertained our local rivals and neighbours Young Munster in a doubled up fixture in Rosbrien last Thursday evening.  Our traditional Christmas fixture with Young Munster for the Kelly Cup was combined with the final of the Limerick Charity Cup to which both team had won through from matches played earlier in the season.

A good crowd came to Rosbrien on a mild evening to support both clubs and also to support local charities.  The game was evenly contested for the first half hour before our visitors went in front with a successful penalty attempt. There were no further scores before half time, leaving the defenders of both the Charity Cup and the Kelly Cup leading by 3 points to nil at the break.

The AIL Division 1A side went further ahead shortly after the resumption of play when they scored in the corner and added the difficult conversion to extend their lead to 10 points to nil. A persistent drizzle descended on Rosbrien for the second half which made ball handling difficult for both teams.

Crescent outhalf Maccon Casserly finally got us on the scoreboard with a well taken penalty midway through the second half.  We then got right back into the contest after 68 minutes when our flying winger Val McDermott touched down superbly in the left corner. Maccon’s superb touch line conversion levelled the game at 10 points apiece.

The game looked destined to finish level as it ticked into injury time in worsening conditions. However, Crescent were rewarded for some late pressure with an opportunist match-winning try as our prop Cathal O’Reilly dotted down to stun our opponents in the last play of the game!  Maccon added the conversion to leave the final score, Old Crescent 17 Young Munster 10.

Massive celebrations broke out immediately in Rosbrien, it being only our third time to win the Limerick Charity Cup and a few years since we last won the Kelly Cup.

Gerald McNamara, Junior Vice President of the Munster Branch, and former President of Old Crescent, was on hand to present the Limerick Charity Cup to our Captain on the night, Kevin Doyle, and Mickey Kelly, son of the late Michael Kelly in whose memory the Kelly Cup is played for, was also on hand to present the Kelly Cup to our Club Captain, Ronan McKenna.