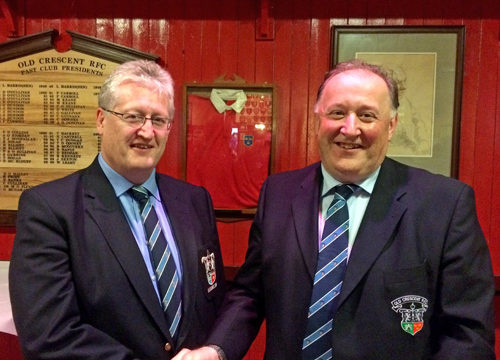 At a well attended AGM in the clubhouse on Monday, 22 May 2017, Tim Duggan was elected President of Old Crescent RFC for the 2017-18 season.  Tim has a long association with Old Crescent RFC, as a former player and long time committee member, and he follows in the footsteps of his late father, Tim Duggan Snr, who was President of the Club in the 1992-93 season.

The AGM was preceded by a mass in the clubhouse for deceased members and their families celebrated by Fr Liam O’Connell SJ.  Members who died in the last year were particularly remembered, Ogie Barrett, Paddy Glynn, Seamus Hayes, Bobby Kennedy, Bobby Mulrooney, Glenn Quin, and Jim Roche.
Pictured at the AGM, l-r, Tim Duggan, new President of Old Crescent RFC, being congratulated on his election by outgoing President, Pat Monaghan.
Tweet