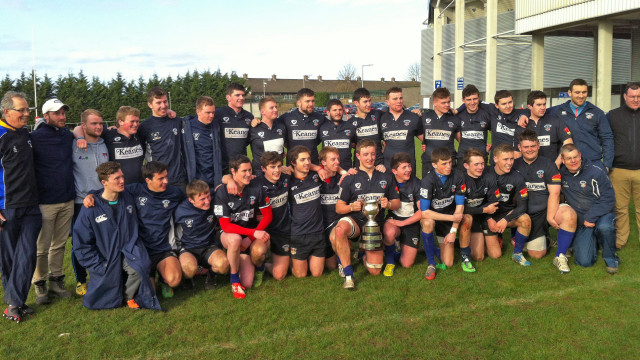 Days like this don’t come along too often for the Club and so a good crowd turned out for the Final of the North Munster under 20 league against Nenagh in Thomond Park last Sunday. A dry sunny afternoon, on a firm pitch with a strong wind, boded well for a good game and this is exactly what we got as a very competent Old Crescent side resolutely went about their business in an efficient manner from the off. If anything Nenagh, playing with the wind advantage in the first half had the better of the early exchanges, getting a foothold in our half, but not too deeply to cause any significant pressure points, in the early exchanges.  Both sides were penalised in the early scrums as each tried to exert dominance, and whilst Nenagh may have had a slight advantage in this area, Old Crescent’s line-out and maul was very effective and gave us the upper hand  for much of the day. Indeed it was the line out which  provided the platform for the first score of the day – Old Crescent stole a Nenagh throw and precision back line play did the rest as Stephen Hackett was able to receive the ball and get outside his man to score out wide on the corner after around 20 minutes,. A superb touch line conversion  into the wind by Conor Lenihan made it 7-0. We took the game to Nenagh at that point in the game and have a very good spell for the next 10 minutes, after which we scored another try that was very pleasing on the eye, as Val McDermott made an exquisite break through their back line without a hand being laid on him until he crossed the line, again out wide, which this time Conor was unable to convert. Nenagh needed the next score and they got it with a penalty from the 10 metre line, without having created any significant pressure. Old Crescent were next to be close to scoring with both Conor Lenihan and Rory Cunningham being off target with drop goal attempts in the last few minutes before half time, although Nenagh got the final score of the half when on entering our 22, we  were pinged for offside and the resultant penalty was easily slotted to make it a 12-6 game at half time, A calm team talk and continued focus and effective support play, gave us the upper hand in the early exchanges of the second half and the key first score of the half came our way with an early penalty by Conor Lenihan to give us a 15-6 lead.  This is how it stayed for much of the second half, as each side sought the decisive next score, without either side getting significant scoring opportunities. Our pack continued to compete very effectively and whatever back line play there was came from us as we continued to stretch the Nenagh defence wide, but it held resolute.  20 minutes into the half, as we continued to pressure their line, Nenagh coughed up another penalty which Conor Lenihan readily slotted to give us a 18-6 lead with 20 minutes left. Nenagh then threw everything they had at us and terrific defence by all concerned, in particular our back row and our centre pairing, meant that our line was not under threat and any penalties resulted in scrums or line-outs from kicks to touch, where we had more than parity and thus were able to hold out comfortably. A last  foray down field provided another opportunity and with the backs screaming for the ball with opportunities out wide, Mark Rickard slipped the pilar defence readily and scored by the posts to give Conor Lenihan the last score of the day with the conversion to lead by 25-6 and  to close out the game on that score line. This Old Crescent team has come together nicely over the past few months and have been playing good football and were able to deal with a strong Nenagh side with a big pack and some strong runners in the back line that were just nullified by a great Old Crescent team effort on the day. Well done to the entire squad and management team, who now concentrate on their play-off game for a place in the All Ireland under 20 league quarter finals with an away game next week. Thanks also to the large and loud Old Crescent support, which was great to see and hear ! 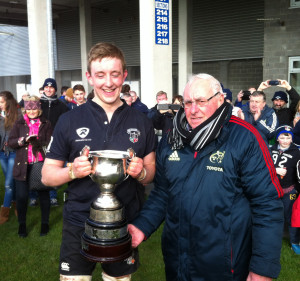